I’ve been a fan of sci-fi-cyberpunk-whatever-you-call-it-or-him author Neal Town Stephenson for years—well, decades actually. From back when he had hair. (No, I’m not trying to insult him even though I probably just did. I’m a few months older than he is, and besides, I think he shaves his head.)

(BTW, the title of this post is a lame attempt at doing a Neal Stephenson-style title. Eventually, if you care to try, you might figure it out. I tried using some HTML symbols in it, but Word Press wanted to read it as actual HTML. It got weird. But no weirder than my love of parenthetical asides.)

I first became aware of him sometime in the mid-1990s through one of his articles in Wired. I kept a few, the oldest a 1994 issue that included “Spew,” a short story that today I’d describe as The Matrix meets Hee Haw. (Now that I think of it, The Matrix would have been more fun with a few Buck Owens types. Imagine if The Oracle turned out to be Minnie Pearl!) 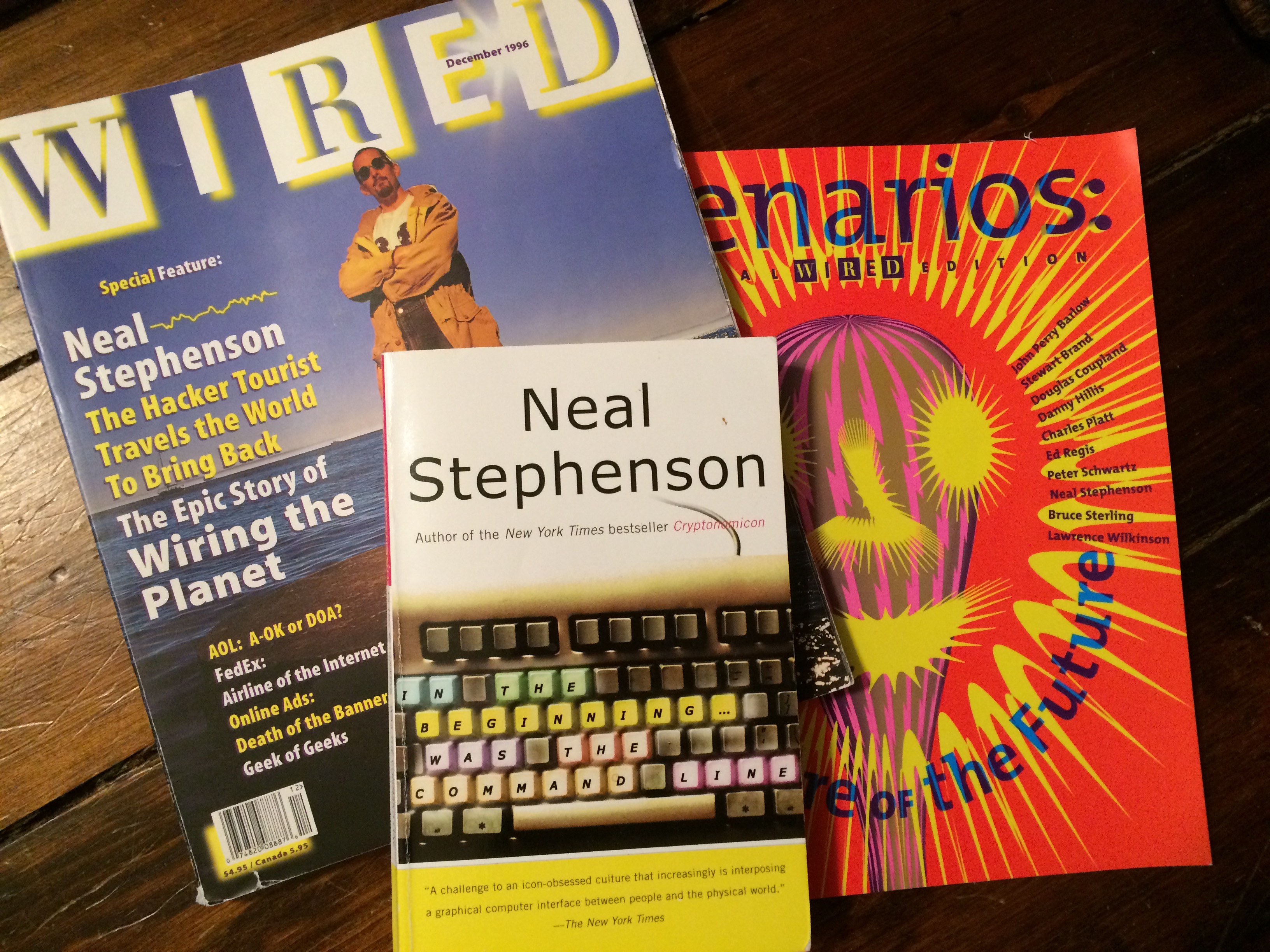 Whenever I look back at Stephenson’s older works I invariably find a passage which has new resonance with me. For instance, if I changed “guy” to “gal,” I could have written the first sentence of “Spew” about myself today:

Yeah, I know it’s boring of me to send you plain old Text like this, and I hope you don’t just blow this message off without reading it. But what can I say, I was an English major. On video, I come off like a stunned bystander. I’m just a Text kind of guy.

Video is massively more important today than in 1994, but I’m still a video voyeur. I’ll view it, I’ll shoot it, but I don’t want to be in it. (I’m a Twitter voyeur too, but that’s another story.)

In keeping with my habit taking a fresh look at Neal’s old works, I cracked open the slim non-fiction paperback, In the Beginning was the Command Line, his 1999 analysis of the state of computing back when the Mac v Windows debate actually mattered. (“Cracked open” is not a cliché in this case. The book was so brittle the binding literally cracked.) It was published in that short span of time after all the other commercial operating systems had flamed out and the era of the mobile device had not yet dawned. (Yes, Linux was around, but A, it’s free, and B, it was only used by serious nerds. Some things never change.)

It was fun to re-read Stephenson’s take on the relationship between computers, their users, and their designers and coders and think about our first home computer (an Osborne “portable” with a CPM operating system), or recall that first magical mouse moment (complete with phantom wrist pain).

But then I read a paragraph that instantly—in my head, anyway—became a dead-on analogy between early developments in computer operating systems and today’s Next Big Thing in automotive engineering: the drive-by-wire-on-human-growth-hormone known as the autonomous vehicle. Maybe someday it’ll make cars safer. But will cars still be fun? I doubt it. Makes me want to hang on to my 2003 Mini Cooper S with the John Cooper Works performance package. No USB port, but on the upside no snoopy black boxes or mommy-car helpers either.

So here’s Stephenson on the graphical user interface, or GUI—all the graphics and images and icons that mask the zeroes and ones that comprise the code running the machine:

The introduction of the Mac triggered a sort of holy war in the computer world. Were GUIs a brilliant design innovation that made computers more human-centered and therefore accessible to the masses, leading us toward an unprecedented revolution in human society, or an insulting bit of audiovisual gimcrackery dreamed up by flaky Bay Area hacker types that stripped computers of their power and flexibility and turned the noble and serious work of computing into a childish video game?

With apologies to Stephenson, here’s my automotive analog:

The introduction of autonomous vehicles triggered a sort of holy war in the automotive world. Was autonomous driving a brilliant design innovation that made vehicles more practical and therefore safer for the masses, leading us toward an unprecedented revolution in human mobility, or an insulting bit of drive-by-wire gimcrackery dreamed up by ambitious Bay Area corporations and embraced by Detroit, et al, that stripped automobiles of the power of human-machine interface and turned the noble and serious work of driving into a childish video game—sans joystick?

I had never before thought of the increasing digitization of the automobile/driver interface as a GUI, but it pretty much is. Although there is an irreducible number of mechanical interfaces required to move a mass of metal, plastic, rubber, and glass down the road, there is no longer any such restriction in the cockpit. With an autonomous vehicle, no mechanical interface is required to start and control the vehicle, other than perhaps Butt in Seat (AKA BIS).

BIS was the same AVT once enjoyed by drunks in Ye Olden Days (YOD), when Old Dobbin waiting patiently outside the tavern could be relied upon to know the way home no matter what state his owner was in.

In YOD horse/rider interface code, the program might read:

In the 21st century however, the fact that your ride has a brain (virtual or actual) won’t get your DUI charges dropped. I recently saw a news item about a guy in Louisiana who got pulled over and ticketed for riding his horse under the influence (would that be an RUI?). (For some reason this reminds me of when my horse-avoiding husband—auto journalist Tony Swan—said to a horse-owning friend, “I refuse to drive anything with its own brain,” to which our friend said “Have I got the horse for you!”)

So after all this appropriation and misapplication of Neal Stephenson’s genius, this is the only semi-profound thing I came up with: did it ever occur to you that the abbreviation for “Neal Town Stephenson’s Books” is NTSB, AKA the National Transportation Safety Board? No, I’ll bet it did not.

(A belated postscript: Someone asked me to help decipher the title of this post, and when I revisited it I realized I’d forgotten what HGH stood for and it took me 10 minutes to find it in the text! So here it is: Neal Town Stephenson plus Graphical User Interface equals Human Growth Hormone plus Autonomous Vehicle Technology equals Ye Olden Days plus Butt in Seat.)